Skip to content
Flatland: A Romance of Many Dimensions. It is a science fiction novel which mathematicians love. Also physicians, architects, designers, abstractionists. Written in London by Edwin A. Abbott, a school principal , the novel is a satire of the Victorian society’s classes and hierarchies. Flatland tells the story of a fictional two-dimensional world. It an Euclidean everything – flat population — but with strict class-society rules — flat environment, flat houses. Inevitably, this leads to superb cognitive challenges, since all you can see from your flat paper-sheet level viewpoint is only 2D objects, which appear to you as anything between a point and a long line. In many cases, you can only distinguish one line from another by the presence of fading light farther from the eyes, which may be the difference between a line, a triangle, or a polygon. Or, for that matter, a circle. The author has conveniently provided numerous drawings, but those with better spatial abstraction skills can extract the beauty of this geometry-based class society from the text itself. Flatland is a world where acute means danger or even death. A world, where the more angles (and sides) you have, the higher your class in the society, so Circular and Polygonal families rank highest. Acute-angle makes great soldiers, and women are merely a line, which, looked from the sides, are mere points, hence almost invisible and unimportant. Victorian in so many ways. To appreciate the delicacy and limitations of social interaction in Flatland, we took just one drawing from the book, depicting how Flatlanders look at — and immediately recognise the social class of — a Merchant (an Equilateral Triangle) and a Physician (a Pentagon): 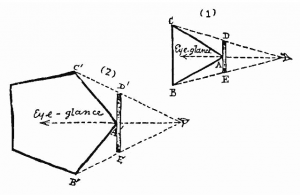 “It will be obvious, to every child in Spaceland who has touched the threshold of Geometrical Studies, that, if I can bring my eye so that its glance may bisect an angle (A) of the approaching stranger, my view will lie as it were evenly between his two sides that are next to me (viz. CA and AB), so that I shall contemplate the two impartially, and both will appear of the same size. Now in the case of (1) the Merchant, what shall I see? I shall see a straight line DAE, in which the middle point (A) will be very bright because it is nearest to me; but on either side the line will shade away RAPIDLY INTO DIMNESS, because the sides AC and AB RECEDE RAPIDLY INTO THE FOG and what appear to me as the Merchant’s extremities, viz. D and E, will be VERY DIM INDEED. On the other hand in the case of (2) the Physician, though I shall here also see a line (D’A’E’) with a bright centre (A’), yet it will shade away LESS RAPIDLY into dimness, because the sides (A’C’, A’B’) RECEDE LESS RAPIDLY INTO THE FOG: and what appear to me the Physician’s extremities, viz. D’ and E’, will not be NOT SO DIM as the extremities of the Merchant. The Reader will probably understand from these two instances how—after a very long training supplemented by constant experience—it is possible for the well-educated classes among us to discriminate with fair accuracy between the middle and lowest orders, by the sense of sight.” Should — at this stage — that the “young and inexperienced” deduce from this example “that Recognition by sight is an easy affair, it may be needful to point out that in actual life most of the problems of Sight Recognition are far more subtle and complex.” “If for example, when my Father, the Triangle, approaches me, he happens to present his side to me instead of his angle, then, until I have asked him to rotate, or until I have edged my eye round him, I am for the moment doubtful whether he may not be a Straight Line, or, in other words, a Woman.” While 1884 may seem long way back in time, we at De Facto certainly find much wisdom in this literary work, which only confirms yet again that reality is an elusive concept with cognitive complexions far beyond the trivial. Now, in case you are interested in the original text and drawings? You may download a copy of Flatland: A Romance Of Many Dimensions from Project Guttenberg. An audiobook (slightly more confusing, as you need to reconstruct the drawings in your mind based on the read description) is available from LibriVox (read by Ruth Golding).
Posted in De Facto matters